Raspberry Pi 2 Model B and a camera flash

You may have heard about an issue with the new Raspberry Pi 2 Model B computers which were released recently. If you haven’t, the story is that the Pi will unexpectedly reboot if a camera flash is triggered too close to the computer. Apparently it’s caused by the photoelectric effect, which is very interesting. The camera has to be relatively close for it to work though and I don’t think it’s a huge issue. Cool though!

My conclusion: the Pi is shy, and there’s nothing wrong with being shy.

I managed to replicate the issue, and I have posted a video of it on YouTube.

Raspberry Pi 2 Model B- an overview

The new Raspberry Pi will also be capable of running Windows 10. Microsoft announced the version of Windows 10 for the Pi will be free and will run natively. Currently, the Maker community is being encouraged to register as a Windows Internet of Things Developer. The link is- https://dev.windows.com/en-us/featured/raspberrypi2support.

Though I haven’t yet had much time to play with the new Raspberry Pi, I’m really excited about the development. I think the foundation are making computing education more accessible and affordable. Purchasing my first Pi inadvertently taught me about electronics, and it even got me soldering again (something I hadn’t done since my first year of High School). If a Pi has had that effect on me, a seasoned nerd, it must be fantastic for those just starting to learn about computers.

Anyway, I’m off to think up some new projects for my new Pi!

Since I have a variety of Raspberry Pi models in my possession, I wanted to benchmark them, out of sheer curiosity. When looking for suitable benchmarking programs, I found a link to Roy Longbottom’s site, where he has a large collection of such tools. The website can be found at http://www.roylongbottom.org.uk/Raspberry%20Pi%20Benchmarks.htm.

I’ve got the results from my Model B, Model B Plus, and the newly released Raspberry Pi 2 Model B. Once I’ve analysed the log files produced, I’ll write a blog detailing my findings. Admittedly this is the first time I’ve tried benchmarking anything! 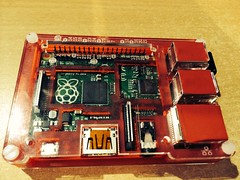